Darko TOPALSKI – since 1976 (unofficial version and more personal one) 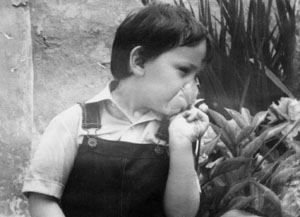 For some time I’ve been having that feeling I should write this more personal bio, more life like one. Since I was a kid, drawing and painting was like diving deeply into a new realm, into another dimension. Everything would just stop and I would enter that new vivid world. My father is a chemist and he has had an interest in photography,… back then he had a small black & white photo lab in our bathroom, with that red bulb, and I can still evoke a smell of chemicals inside and that magic moment when something starts to appear out of white paper. During summer school breaks I would go to the countryside, and since I haven’t had many friends there, one of my main occupation was to explore old magazines. My grandparents had  a ton of them in the shed, and photos of  classical paintings and some really nice illustrations could have been found in them. In one of them I saw a painting by Verrocchio “The Baptism of Christ”, and I said to my self “That is a grat one!”. I also remember that feeling that it would be hard or almost impossible to paint something like that! 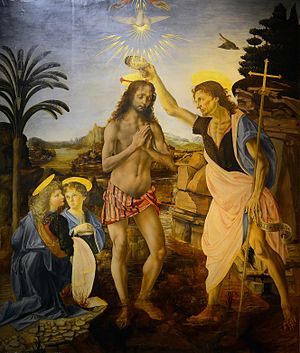 The Baptism of Christ (Verrocchio)

There were some of my first attempts  to draw from photos. Sometimes I would paint, usually watercolors. On one occasion my grandfather made a real wooden house for chickens in the middle of a backyard. I asked him to let it be my art studio. That was my first one and I still can revive that wonderful and special feeling when I sat down there for the first time. My grandmother had many flowers in the yard and their smell was something special.

Trivia: Although I sill like flowers I’ve painted only few paintings of them…

My childhood was a happy, careless, and wonderful one until I was 9. Then some misfortune events led me to a broken glass at a neighborhood door and an injured left arm, lots of blood, finished in a hospital, operations, bandages,… Luckily my arm is operational, I have two scars and from that moment I’ve started to think more about causes and consequences. In some dimension I’ve probably died then. While my friends were playing some childish and potentially dangerous games I simply stood  aside. The scar in the upper part of my arm, at the back side of it, looked scary and other kids were like “LOOK at THAT … Eeeeew”…  back in the 80’s there was a movie “A Nightmare on Elm Street” and that part of my arm reminded them of  Freddy’s face. Maybe, on the other hand, it was a reason for me to step further inside myself. There are two sides of every coin and some misfortune could lead to many great moments.

Drawing of my mother, that circle at the left is my baby sister

Art for me is something personal, art is not just a finished painting, art is when I’m sitting down in my studio; it is in the smell, it is in the feeling, it is in that magic moment when I or you crate something out of nothing… canvas, dust (pigments) and some binder. It begins inside, deep inside of every artist where is that piece of stardust, that sparkling moment, that urge to take something and to start creating something more. Art is not just learning how to, it is getting closer to yourself. When I make a spiritual progress within myself it is reflected on my paintings as well.

My uncle from Becej, Serbia, was always interested in electronics. Every time we were in a visit he was making something that would do something,… beeping, flashing,… It was so magical and interesting for me that I’ve started to develop interest in that too. When time came for me to enroll some high school, I decided to go to electro techinic high school, instead of an art school!!!

I remember clear as day: “I’m going there to learn something practical, something I could make a living out of, art is and always will be, and I will always create and paint.”

There is another reason… Here, art school was considered as “a school for junkies, a choice if you don’t know what to enroll, with art you can’t make a living,…”

After all these years You can make a decent living or more than a decent one, if you work hard, or surrender yourself and your time to work more. If many people can do a job for other people, artist should spend at least that time in a studio, doing job for oneself. That is how to become or how to be professional artist. On the other hand, you will have free time whenever you like.

So, I ended up in the secondary comrehensive school “Mihajlo Pupin”, the best class in electro school, but instead of my practical urges, there were tons of theory, an outdated school program in a field that was having and still has great expansion. I continued to draw on the sides of my notebooks, on the back, and to paint at home and at the art classes. When you are young, you create in that special moments when you have urge to do it; it’s not every day, it is not constant. There was another moment,… My painting and drawing was normal for my parents, there wasn’t someone wise enough that could say:”… he has a great talent, he should do this all the time…” (luckily that happened later).

In the third year of high school I had the idea to enroll the Art Academy, and I was going on drawing classes. My parents had the idea it would be better for me to finish high school first and then to go to the Academy.

These were the 90’s in the former Yugoslavia, although we didn’t have a civil war here where I live, we had post communist society, that is somewhere in between East and West, between hammer and anvil, corruption, deep financial crisis, sanctions,… NATO bombing of Serbia in 1999 (United States called it “Operation Noble Anvil”, while we here knew it as a “Merciful Angel”),… after that we had even less.

After high school I decided to go to the Faculty of Economics, to try to figure out where the money in this world is. After a year or more, I realized that the money is here but not evenly distributed, and while my parents were teachers (father chemistry and mother mathematics), and didn’t have proper connections that would ensure my further employment, many of my colleagues at the beginning of their education in the economics already knew where they would start working after their University.

Was it because of my mother’s unfulfilled desire to become a newscaster, or because I am empath and had a problem in a crowd, I decided to work on that problem, that led me getting a job at local TV stations where I worked as a presenter, producer of the day, reporter, journalist (at former TV Apolo today NSTV and TV Panonija).

There, in between news in the studio, in my spare time I drew some drawings. One of my colleagues noticed them, and asked if I was an artist. I told her that I wasn’t a professional, and that I had some more works at my home and invited her to come and see. She was an art historian, and when she saw those works and said to my parents that I was really gifted, I think that was the moment they realized there was something more than just a kid who likes to draw and paint.
Another colleague from that same TV station showed me an Art History book. There, I saw for the first time the painting “A Woman at Sunset or Sunrise” by Caspar David Friedrich and had a really strong connection with it, a really powerful resonance.

A Woman at Sunset or Sunrise by Caspar David Friedrich

Back then internet was via connection of dial-up 56k modem. Now you can go to YouTube and find great tips or watch some great artists’ tutorials how to draw, paint ,… When I was starting, there were just that great wish to create and occasional resources. I’ve learned how to code HTML, and made my first website with my paintings (in 2002) at hosting space reserved for personal sites at that dial-up hosting provider.

It took me a really long time,a lot of effort and energy to make it,… It couldn’t be just another website, I had intention to make it something more, and that more took so so much of my free space.

I did many, “not art related” jobs in the past, but what to say other than “I just like to paint!” … and maybe if you have a Dream of greater yourself… JUST GO FOR IT!

Before or after everything,… I’m really grateful to my wife and my son, on their time and everything, because sharing a space with sometimes grumpy artist, that always has an idea of better paintings, and that brushstroke with 00000 brush is not perfect… Oh boy 😀