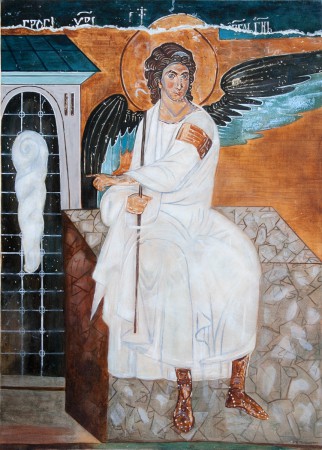 Interesting about this painting: Wherever you are in the room it seems “White Angel” always looks at you (like the “Mona Lisa”  or original Orthodox Icon “White Angel” (“Beli Andjeo”) from Serbian monastery Mileševa.)

White Angel (Serbian: Beli andjeo) is a detail of a world famous fresco from the Mileševa monastery circa 1235 AD in Serbia, Mironosnice na Hristovom grobu (Myrrhbearers on Christ’s Grave). It is one of the most famous frescoes in Serbian culture, but is one of the great achievements in European painting. It is considered one of the most beautiful works of Serbian and European art of the High Middle Ages. This monastery was built during the reign of King Stephen Vladislav I of Serbia. Painter was showed on the fresco a events from the Bible, which describes the arrival of myrrhbearers on tomb of Christ on Sunday morning, after the events of the Crucifixion, to the his body embalmed it with myrrh and aloes, wrapped it in clean linen. The fresco depicts the Angel Gabriel dressed in white chiton sitting on the stone and the myrrh-bearing arm shows the place of Christ’s resurrection, and his empty tomb. The fresco is located on the south wall and dating around 1235 AD.
A picture of White Angel from Mileševa was sent in 1963 as a symbol of peace and civilization, as a message in the first satellite broadcast signal from Europe to America, just after the missile crisis. Later the same signal was transmitted to space to meet eventual extraterrestrial life forms. It once again contained the White Angel.